I mentioned that my colour post for Cosmic was probably inspired by my Halloween decorations, and Sama Yalin wanted to know what "tentacle furniture" was all about. I am sure others were thinking it but not saying. So I went around my castle taking snaps of all the tentacular goodness I've set out this year.  I haven't finished decorating and there will be more traditional items, but tentacles probably don't feature so prominently - or so numerously! - in most displays this time of year.

Just to give you some background, because I know you're asking, what IS it with all these tentacles anyway?! - I like tentacles. (Well that's clearly a given...) What I mean is, I love the taxonimic class Cephalopoda - octopuses, squids, cuttlefish and nautiloids (and the extinct ammonites). They're incredibly interesting, unusual creatures and tentacles, as an alternative limb structure, are an obvious part of their charm. Clearly I'm not the only person who thinks so, and there is quite a bit of tentacle 'stuff' around, which I tend to snap up when I find it. And yes, of course I have avatars (proper animals, not just my octomer hybrid). So while Halloween gives me a wonderful excuse to tentaculate my castle, I find them fun, quirky and charming rather than spooky.


Anyone for tea? The table can be Mother. It can pour and stir sugar for two at a time!
Also gives out transferable squid cups (as pictured).

While bringing up the chandelier in inventory for credit details, I made a very happy discovery. My giant blue-ringed octopus, which I had thought lost, was labelled KRAKEN! Goes to show the perils of failing to file your purchases. That objects folder is a black hole and it's all very well using search key terms but you have to remember which term to use...


Hubble, bubble, toil and trouble; pumpkin soup, at the double!

The information you seek is in THIS scroll... 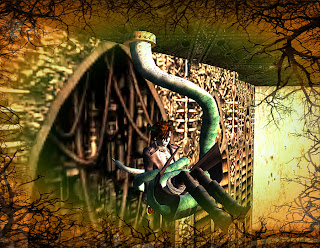 Properly trained, your inter-dimensional tentacle intruders can make quite
comfortable and avant-garde furniture! Self cleaning and feeding!

My bedroom. With added tentacles.


My posing 'mirror' I use for matching outfits to the Colour Challenge.
It has sprouted tentacles...


The next three pictures do not involve tentacles. But I wanted to show you anyway.


The legend goes that if you speak her name three times in front of a mirror, she will appear and scratch your eyes out. This was used to fantastically creepy effect (but somewhat stealing from The Ring) in the first season of Supernatural. So I asked Pama to make me a mirror... which I modified (removing the visible mirror parts) and placed over my tentacle vanity mirror :) If you ask me he should sell it. If you want one, I'll ask him for you. Blood drip effect is animated, btw.


Et tu, Edward?! Knew I shouldn't have succumbed to temptation and bought those bears. Dragged into my own bath and had my heart ripped out...

TheMaxx Dragon's Castle by TheMaxx Dragonash
MIASNOW Photo FX Halloween HUD (this year's group gift) for the veiny borders - they don't all fit exactly because there was some client window resizing in between photos.

Gothic Demon monster teddy bears. They play music. Each bear comes with its own appropriate sound track, full songs from pop rock culture. I. Could. Not. Resist :3 There are two more bears on sale not shown here (vampire and Frankenbear, so cute he is made of mis-matched pieces from other plushies!) and plans afoot to make more, including possibly a Cthulhu-bear, WITH TENTACLES!


DooDads Poison Bottle jewellery
Amaranthus Starburst Halloween Brooch (2011 group gift)
Implings Rose (given to me by a zombie whose grave I was dancing on, so romantic!)
Posted by Fledge at 05:38

Fledge
A golden half-fae dragoness in Second Life who loves buying and hoarding pretty things, occasionally dressing up in them and attempting artistic photographs.